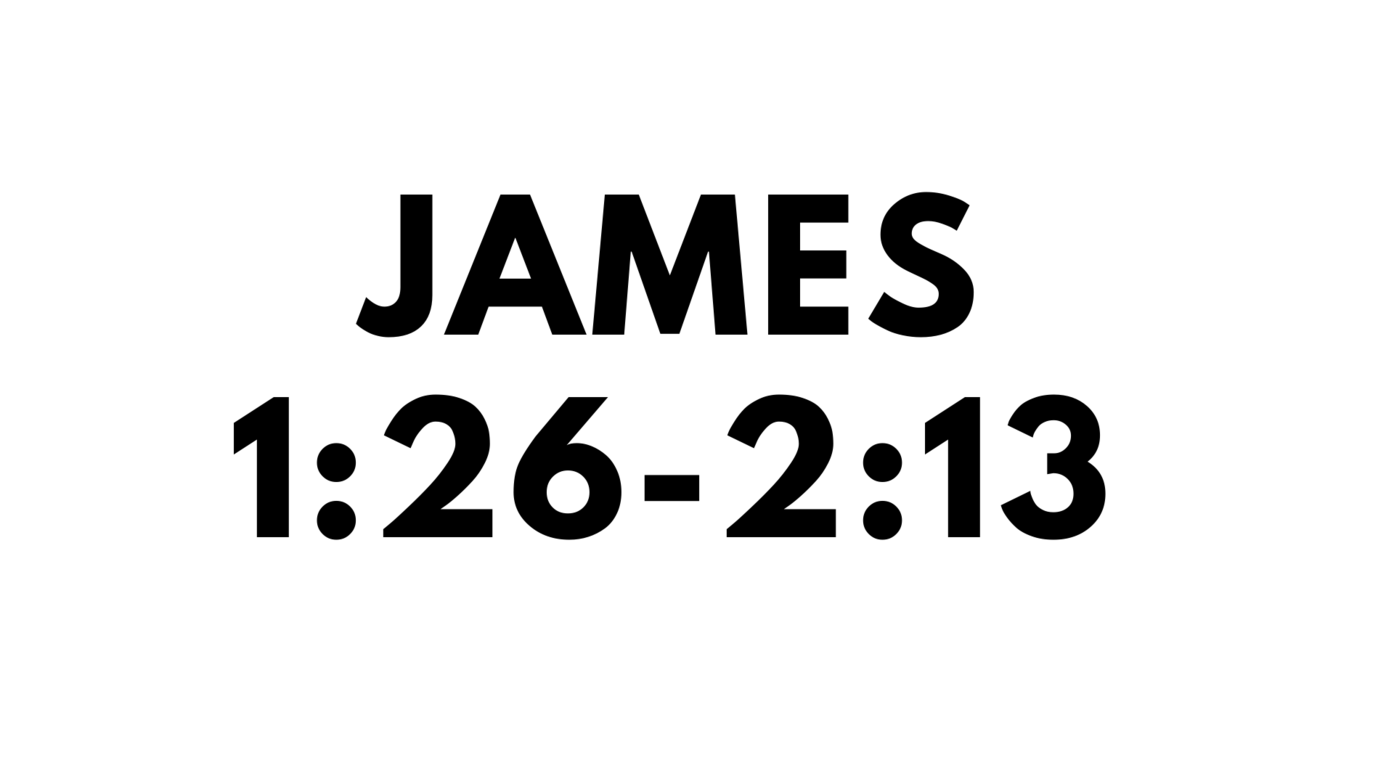 26 Those who consider themselves religious and yet do not keep a tight rein on their tongues deceive themselves, and their religion is worthless. 27 Religion that God our Father accepts as pure and faultless is this: to look after orphans and widows in their distress and to keep oneself from being polluted by the world.

My brothers and sisters, believers in our glorious Lord Jesus Christ must not show favoritism. 2 Suppose a man comes into your meeting wearing a gold ring and fine clothes, and a poor man in filthy old clothes also comes in. 3 If you show special attention to the man wearing fine clothes and say, “Here’s a good seat for you,” but say to the poor man, “You stand there” or “Sit on the floor by my feet,” 4 have you not discriminated among yourselves and become judges with evil thoughts?

5 Listen, my dear brothers and sisters: Has not God chosen those who are poor in the eyes of the world to be rich in faith and to inherit the kingdom he promised those who love him? 6 But you have dishonored the poor. Is it not the rich who are exploiting you? Are they not the ones who are dragging you into court? 7 Are they not the ones who are blaspheming the noble name of him to whom you belong?

8 If you really keep the royal law found in Scripture, “Love your neighbor as yourself,” you are doing right. 9 But if you show favoritism, you sin and are convicted by the law as lawbreakers. 10 For whoever keeps the whole law and yet stumbles at just one point is guilty of breaking all of it. 11 For he who said, “You shall not commit adultery,” also said, “You shall not murder.” If you do not commit adultery but do commit murder, you have become a lawbreaker.

12 Speak and act as those who are going to be judged by the law that gives freedom, 13 because judgment without mercy will be shown to anyone who has not been merciful. Mercy triumphs over judgment.

What we do as a church reveals the god we serve.

Dr. Martin Luther King, Jr., wrote this in confusion and frustration to Southern Church Leaders who would not come alongside his kingdom efforts on behalf of the Black community:

“On sweltering summer days and crisp autumn mornings I have looked at the South's beautiful churches with their lofty spires pointing heavenward. I have beheld the impressive outlines of her massive religious education buildings. Over and over I have found myself asking: "What kind of people worship here? Who is their God?”

The entire witness of the OT shows that the God who liberated Israel from Egypt and established them as a people in the promised land did not favor kings over commoners, rich over poor, nobles over no-names. All were to be honored-- the king, olive farmers, immigrants, the dispossessed, and everyone in between.

In fact, God declares hundreds of times that he is the protector and caregiver of the economically disadvantaged and vulnerable--the poor, the widow, the foreigner, the orphans-- and he says this because human communities instinctively do show favor to the materially well-to-do, knowing we will likely receive something from them in return.

But the gospel puts all people, no matter reputation, class, position, at the mercy of God. And our communities should show this in its relationships and gatherings. Some neighbors are not to be loved more than others, talked to more than others, given more power in our community more than others, treated with more capacity than others. Jesus made clear that the one who holds everyone else in higher honor than themselves will be made first, in seeing themselves as the last. And he says that we should leave such judgments about position in the kingdom community to God (Lk 22:24-30).

Jesus himself, the King of kings, came to serve and didn’t live in the palace or run a well-known synagogue or present as someone to be honored. Would we have received this Jesus as he presented himself? Or would our patterns of showing favor to people with money, influence, and opportunity have caused us to overlook him without an afterthought?

Psalm 89 Lead and Steward Wisely Where Does Your Devotion Lie?